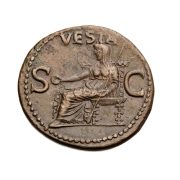 Vesta, is the brightest of the larger asteroids orbiting between Mars and Jupiter and second only to Ceres (now elevated to Dwarf planet status) in size.  Its orbit is 1325 days (3.6 Earth years) and its rotation is approx. 5.6 hours.

Though its presence was mooted by Johannes Kepler in the 16th century, its discovery is recorded as March 29th 1807. Notably, the Sun that day was at 8 Aries – one of the cardinal degrees often accentuated on days of high drama in and out of the market-place.

Vesta was the first born of the titans, Kronos and Rhea. Her siblings include Jupiter. Given their shared DNA, it should not astound us that Vesta is a powerful force. Though associated with ‘hearth and home’, vestal virgins, domesticity, care and husbandry, it is perhaps of little surprise that a well-placed Vesta in the birth chart is a factor in the accumulation of wealth.

I work with traders, investors and entrepreneurs. These charts have one thing in common: a strongly placed Vesta. This was a feature mentioned in an article by Bill Meridian over 30 years ago. I confirm his findings. In my own chart, Vesta conjoins Pluto – going some way to explaining my passion for understanding the world of finance, its power and its potential. I should add that many of my clients could be described as philanthropists: a trait that is also apparent in the charts of many eminent traders.

No two traders operate in the same way. Each trader has their own interest and area of expertise. Few, if any, trade successfully in multiple markets. The forex trader might have no interest in commodities and vice versa. A trader who focuses on choosing the ‘best’ stocks, might have little interest in the moment-to-moment alertness required by the day trader who is focused on minute-by-minute adjustments in prices or exchange rates. The trader or investor who focuses on the direction of an index might make decisions based on weekly or monthly trends.

The many differences involved in these different type of commercial activity make it hard to identify the planetary themes that determine the potential for successful trading. We must also remember that even the best of traders will eventually have ‘bad’ periods where they lose more than they gain. A trader who is one of the top ten traders one year may not be in that group the following year.

Two decades ago I was resistant to the idea of adding the position of asteroids into my charts. Yet it is impossible to deny their impact, and these days not only do I place these in my charts, but I also look at the Dwarf planets orbiting beyond Pluto as these too have a compelling counter-point story to tell. (These will be the subject of other essays)

Just as no two traders operate in the same way, we should not be surprised that the planetary signatures for successful trading in trader’s horoscopes vary. What is common is that Vesta holds prominence using orbs of only one degree. The tightness of these configurations accentuates the impact of what I now refer to as the ‘trader’s asteroid’.

I cannot say that a poorly placed Vesta will limit trading ability. What I can repeat is that in the charts that I have studied its prominence cannot be ignored.

Further I can show that at times of peak commercial dealing or trading, Vesta is usually involved.

A remarkable study by the very fine astrologer Sue Kientz, shows that Vesta has a role to play in the charts of (usually political) leaders involved in complex dramas.

This, I think, is the key. Vesta lends ability to master complex and often dramatic situations. Vesta both requires but gives focus. As the ‘goddess of hearth’, Vesta keeps flames burning – from dying ember to raging furnace. Fire requires care: it is often too hot to handle. It is interesting then that those who are listed as top traders, also have Saturn strongly featured in their charts contributing to an ability to maintain control of their thoughts and emotions,

Though in technical analysis textbooks, the Mars-Vesta cycle isn’t named, it’s most interesting that the synodic length of this cycle so closely correlates with a well-recognised business cycle.

Bill Meridian in a study in 1985 and subsequently updated, showed a successful trading strategy to be purchasing the Dow Jones Index when Mars and Vesta were 240 degree apart and selling when they reached 90 separation brought significant gain.

I would not have taken this trade in September 2019 as with the Jupiter, Saturn and Pluto conjunction due in 2020, the outlook was not positive. We will only know if I am ‘wrong’ at the 90 degree separation in a couple of years. I am likely to work with the next 240 separation in 2023.

Examination of the position of Vesta in your natal chart will yield clues as to your talent for investing. Just as important is examination of Vesta position by solar arc direction. Sweeping generalisations are inappropriate here: do not assume that if Directed Vesta is due to conjoin natal Jupiter for example, that this will be your ‘lucky’ year.  If you are a novice in the world of trade this is more likely to manifest as the desire to learn about how and where best to trade. It will not necessarily lead to ‘lucky’ and successful investing.

You could also consider Vesta’s position by transit. I encourage traders to keep a diary. If we can crack the code of their most successful trades (which usually involved Vesta), together we can plan future trading dates.

The following notes consider Vesta in the charts of famous traders and the years in which their activities have hit headlines.

Though my clients do not fall into these ‘top world traders’, I can vouch for the fact that years in which they have each realised great gain, Vesta has played significant role.

George Soros: Unsurprisingly Soros has Mercury in Virgo in square with Mars in Gemini. He is a man with multiple interests, is ever- ready for commercial action, and enjoys the cut and thrust of making deals. Vesta is also part of this configuration. Vesta is in EXACT (1 degree orb) with Mars. This adds an extra layer of meaning: this is someone who enjoys CURRENCY trading especially. I don’t have a timed horoscope but it is entirely possible that Vesta opposes his  Pisces Moon. Certainly it seems he has extraordinary intuition where finance is concerned. He is also an acknowledged philanthropist.

Soros made a substantial amount of money on the forex markets in September 1992 when the British Pound was forced to leave the European Monetary Union. He solar arc progressed Vesta was then in EXACT square to his natal Sun.

It is reasonable to wonder what kind of extra-ordinary trade he might make in 2022 when directed Vesta will be trine his natal Sun position.

Paul Tudor Jones: There is only 4’ of arc in the trine between Mercury and Vesta in this chart. Like Soros he is a philanthropist focused on the reduction of poverty. Following his successful on Black Monday in 1987, he went on to build his capital in 1990 when the Japanese markets collapsed. In 1987, Directed Vesta had just entered Sagittarius. Three years later it was in exact sextile to his natal Sun confirming his trading instincts as near unparalleled.

Ed Seykota: Is a most successful commodities trader whose mantra is ‘ The trick is for a trader to develop a system with which he is compatible’. In his natal chart, Vesta in less than one degree from conjunction with Eris and opposition to Neptune whilst trining Mercury. The Vesta-Eris connection perhaps speaks of trading Earth’s treasures whilst the opposition to Neptune implies lac of fear when it comes to the size of trades. His speciality is in understanding the movement of 20 day averages.

John Paulson:  John Paulson is the man who is said to have made the greatest trade ever: betting against the market and making $60 billion in the process. His natal chart shows Vesta in Libra square Venus in Capricorn and sextile the lunar North Node (Sagittarius).  In 2006 Paulson Credit Opportunity Fund with the strategy of shorting bonds backed by sub-prime mortgages. In 2006, Solar Arc directed Mars trined natal Jupiter – enhancing his ability to deploy the strategy that within a few short years made him billions.  Transiting vesta was moving through Sagittarius conjoining the North Node and the Sun in September 2007 when his ‘bets’ began to pay off.

Nick Leeson: Nick Leeson is the errant derivatives trader who apparently brought down Barings Bank in 1995. His natal Vesta conjoins Neptune and in Grand Trine with both Jupiter and Chiron – all exact within a degree. In 1995, Solar Arc directed Vesta squared Chiron.

Steve Cohen: Steve Cohen, born eleven years earlier than Leeson, also has an exact conjunction of Vesta with Neptune – this time in Libra. He own one of the world’s largest private art collections. He ahs a reported net worth of over $14bn.  With transiting Vesta conjoining his Sun in November 2012 and as Solar Arc Directed was leaving the opposition to his Sun, he was indicted for insider trading. His company was eventually fined over $1.8bn.

John Key: As stated by Sue Kientz, Vesta is often prominent in the charts of politicians. John Key was prime Minister of New Zealand but began is career as a forex trader. After holding office, he returned to the world of finance. In his horoscope, Vesta square the Nodes and Uranus (politics!) and trine to Saturn (all within a degree)

Ivan Glasenberg: Ivan Glasenberg is chairman of one of the world’s largest commodities and mining trading companies, Glencore. His natal chart places Capricorn Mercury exact conjunction Vesta (6’ of arc) and square (within a degree) to Sedna. It is reported that he made most of his billions after the Glencore IPO in May 2011. Solar Arc Vesta was then sesquiquadrate Neptune.

The Financial Universe 2021
Scroll to top