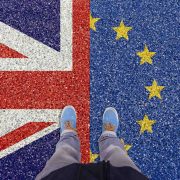 It is now hard to remember that only a few short months ago, Brexit was the lead story across news bulletins. Though no longer of dominating interest, the Brexit process began in earnest on the last day of January 2020. Brexit is only part of another – and yet to develop – story that will likely result in the emergence of a new European collaboration in a few years’ time. Whilst so much attention has been understandably focused on Brexit, from the astrological perspective, the break -up of the European Union and the emergence of a new trading bloc covering many of those lands should arguably have been given as just as much press attention.

Cracks in the European Union have been apparent for years but only now, with each nation adopting different ways of tackling Covid-19 has it been clear that this is not a united union and that each nation, taking into account traditional customs and geography must be in a position to defend itself when necessary.

By the time that many outer and slower-moving planet change signs between 2023 and 2026, world trading conditions are likely to be very different. Yes, likely led by the present (and forecast) pandemic at the conclusion of which the strengths and weaknesses of differing cultures will be exposed.

Strange as it might seem to have a chart for a nation – especially as the legislation under which each tract of land on Earth develops as social, political and economic developments occur, these ‘mundane’ charts have value. Although the formation of the nation of Eire broke up the Union of Scotland, Wales, Ireland and England, in 1922, the chart for the UK based on 1st January 1801, midnight, Westminster is clearly till active. This chart is often thought of as UK PLC – the company chart for the United Kingdom.

Astrologers use a number of methods to determine future trends: one being to compare the position of the planets on any given day, with those at the ‘start’ of a life or, in this case, a nation. By studying how these connections have worked in the past, astrologers can then offer a timeframe and likely development of situations.

It was clear in June 2016, when Uranus and Eris made rare alignment, that the outcome of the Brexit vote would bring seismic shock, discord and upheaval. The near 50/50 vote found communities and families divided. Without going through each of the various traumas (including proroguing parliament) along the way, and as each of these steps linked back to the Brexit vote, tension has been palpable and only eased when Brexit was set in full motion on January 31st 2020.

Yet, just as the UK was stepping away from collaboration with the European community, that cooperation with European counterparts has become essential in light of the corona virus. The list of industries that clearly MUST pull together in the coming months – and just as they’d agreed to ‘part’ company, is extraordinary. From health and disease management, to travel (especially air) and distribution of essential items and cross-border financial transactions, co-operation will be vital.

The chart for 23.00 local time in London (midnight in Brussels) on 31st January 2020 puts asteroid Ceres out of bounds (just as it was during the Spanish flu) pandemic of 1918 and the Moon ‘Void of Course’ conjunct Chiron’s heliocentric north node. This chart did not augur well for the health of the UK – especially when coupled with Uranus’ (think shock and unexpected) transit of the ‘house of life and death’ chart of the 1801 chart.

Meanwhile, sterling – once one of the world’s favoured currencies, has fallen dramatically against the US dollar: a trend that seems set to continue.

And yet: by the Grand Mutation of Jupiter and Saturn in Aquarius (the first of its kind since the 13th Century), decisions as to how best to move forward with Brexit will need to be made.

We can focus on three main questions: is investment in the UK advisable? What will happen to sterling? Can the UK forge the trade links that those who supported Brexit believed possible, and will these really be preferable to further engagement with the European Union? Setting these questions against the backdrop of the corona-19 virus and its legacy adds to the complexity.

The answers may indeed lie in the aforementioned planet cycles.

Investing in UK PLC: the 1801  chart has been under duress from outer planet transits for many years with the break-up of the Union hinted at– astrologically – many times. The chart for the Scottish referendum in 2016 suggested potential for another referendum that would result in Scotland breaking away. Meanwhile, Northern Ireland and Eire could be united in the coming decade as indicated in the 1949 chart for the Republic of Eire. The push for this is likely to begin in earnest from December 20th 2020 when Jupiter returns to the ‘natal’ position in this chart.

Inevitably, there will need to be a ‘new’ chart for England and Wales. This is likely to emerge by 2026 when there will be heavy emphasis in Fire (Neptune and Pluto) and Air signs (Uranus and Sedna). This change in the ‘cosmic vibration’ will surely bring major change to international borders and have heavy emphasis in the British Isles.

Good and strong trade links between the island of Ireland and British Isles is advantageous to all. There is shared history and understanding. A possibility is that following a ‘united’ island of Ireland and then a potential break-away Scotland, is that a new trading block connecting all will be formed – presumably after Pluto moves from Capricorn in 2023.

Obviously much will depend on the actual distribution of the other planets around this framework but probable that the geographical area known as ‘England and Wales’ will become known as a place for advanced science and creativity in medicine and in the arts especially  – and yes, these should be worthy of investment. Playing for the long-term, investing in these sectors and emerging as Jupiter moves through Aquarius in 2021, is worthy of consideration.

Forecasting the outlook for sterling is not as straightforward. It seems highly likely that by the Grand Mutation on December 20th, that a global digital currency will be available – and the preferred currency for many.

London has been viewed as one of the financial capitals of the world. However,as the march of Brexit continues, London’s position as a key area for global finance is threatened. Indeed, the Mayor of London has even proposed that London itself should break away from the Brexit negotiations and stay a member of the European Union.

The potential for financial discontinuity appears ‘written in the stars’. Mars is often thought of as the ‘God of War’. Mars has a position in every chart and that position matters. It is an activation point. We should not be surprised then to note that – and especially since – a lunar eclipse at the end of January 2018, that that Mars has been under planetary pressure.

In 2021 Uranus will be exact on the position of Mars in the 1801 chart. This suggests an ambush of present-day financial systems and the displacement of sterling as a preferred ‘safe haven’.

It is always dangerous to forecast where Uranus is concerned: it is, after all, the planet of the unexpected – and to manifest must effect an ambush of some kind. Perhaps, in light of the Brexit negotiations, we ought not to be so surprised to find that the last quarter phase of Saturn and Uranus accents Mars’ position of the UK PLC chart: whilst, Uranus is ‘on it’,  Saturn is 90 degrees from it. Has this happened before? No. Will it bring noticeable effect? Yes and double yes.

To be clear: Uranus is the ‘planet of the unexpected’ whilst Saturn is not known for risk-taking. Saturn is the planet of order and control. Uranus brings disrupting influence whilst Saturn looks to conform. It is perhaps unsurprising that since the early 1980s, their phases have coincided with developments in the world of crypto-currencies. It is entirely possible that a ‘new’ crypto with formidable strength and immediate global impact will emerge in the London markets in 2021.

The idea behind Brexit was to have better and more profitable trade links. In placing Europe ahead of Commonwealth, much goodwill was lost and will need to be retrieved even whilst arriving at fresh understanding with European neighbours. Obviously the situation is messy and complicated – even without the corona-virus factor.

It is fascinating to note that next year, as Brexit takes on fresh momentum, that Mars by solar arc direction (a recognised forecasting technique) will be exactly conjoined with Mercury (planet of commerce) in the 1801 natal chart. This Mercury lies in the 3rd house (communications and trade) and is in Sagittarius. Dialogue and negotiations are likely to gather impetus and yes, many deals struck – especially with near neighbours on the European continent and with the very many commonwealth countries.