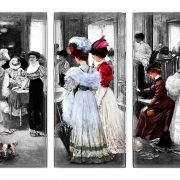 We know that the cosmos doesn’t do EXACT repeats yet it is tempting to look back to similar planetary pictures and wonder to what degree themes will repeat.

There is a date for the ‘first’ sitting of the Westminster Parliament on 20 January 1265 (though the exact time of the event is unknown).

Even without that exactitude, we can review the planetary pictures of the day and find – unbelievably, that the Sun was EXACTLY conjunct both Eris and Sedna at 8 Aquarius. In the last 1000 years Sedna and Eris have only aligned 7 times –as viewed from Earth. Each of these seven events took place between 1263 and 1265. There has been no conjunction since! Clearly 1263-1265 was a very special time indeed. There was only one date in that time frame when the Sun also aligned with this conjunction.

The inauguration of this parliament on the very day when the Sun too was at 8 Aquarius goes a long, long way toward explaining the durability of the Westminster parliament and, since both Sedna and Eris have strong ‘feminine’ roles, perhaps says something about Westminster as being seen as the ‘Mother of Parliaments’.

Though the Sun has transited this chart 754 times since 1265, using the solar arc method of forecasting, the solar arc Sun has travelled just a little more than twice around the chart. With the distribution of planets in 1265, Mercury is behind the Sun and by Solar Arc has only just reached Pisces. It is this that may well have been a crucial factor in the mercurial chaos of recent months (complete with Gemini or Mercury-ruled Prime Minister Johnson)

In the last few weeks, – in fact since Johnson’s decision to prorogue parliament as indicated mid August as Mars opposed solar arc Mercury, – the transiting stellium in Virgo, opposing the solar arc configurations have aggravated confusion. Though there has been much talk of attention to detail conclusion and practical arrangements have yet to be agreed.

The last time that this solar arc pattern occurred was in the mid 17th century when Cromwell took control of parliament.

As stated, the cosmos doesn’t do exact repeat performances. Whilst the chaos might appear similar we are unlikely to see that repetition.

That said, more upsets are on the horizon

In 2021 and 2022, solar arc Mars affects both Uranus and then Pluto, to be followed by solar arc Saturn opposing Pluto in 2024. The arc events of 2021 and 2022 indicate struggle, upheaval and yes, perhaps even explosion, followed by complete upheaval but potential re-establishment in 2024.

We should of course note that the very fabric of the building is under duress presently. Big ben is draped by plastic and scaffolding whilst the interior of the Palace of Westminster is in desperate need of repair and overhaul.

It has long been mooted that the building is ‘wrong’ in other ways and that it is time for central government to be literally that – ‘centred’ in the heart of the country. Many are mystified by the workings of the Westminster village as it is known to politicians and journalists both of whom seem so very out of touch with the public. Perhaps things would be different if Westminster became a tourist zone and a new parliament convened elsewhere. (The very brilliant astrologer Roger Elliott made a forecast years ago that parliament would be moved north post 2012. He may not be many years out)

How though can we make practical use of this information? If we concede that we are witnessing the collapse of a system, what will replace it? – and when?

Fact is that before 2026, Neptune, Pluto, Eris and Sedna will all have changed signs. Note that the first two do so every decade but that it is over half a century since Sedna last made ingress (1966) – and many thousands of years since that planet last moved through Taurus and Gemini. We are about to enter truly uncharted waters.

What we know that is that Neptune will move into Fiery Aries, Pluto into Aquarius (Air) and Sedna into Gemini (Air): major contrasts to the present line up in Pisces (Water) Capricorn and Taurus (Earth). Not only does this signal the rapid developments and deployment of artificial intelligence but also the probability of the development of a new political system. Those focused on the arcane procedures of the past might make better use of their energy by focusing instead on how every individual could have their voice heard.