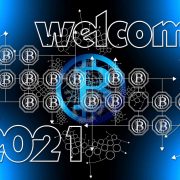 The Grand Mutation marked by the conjunction of Jupiter-Saturn that coincides with the solstice on December 20, 2020 marks the dawn of a 240 year-long cycle and heralds a new age. There was a similar Grand Mutation in 1226; far predating the banking and economic systems in use today.

The 13th century was a period of rapid European prosperity as trade routes running both East to West and North to South flourished; in part due to expanding infrastructure that made the passage of trade easier and safer. By the end of that Century, and with new banking systems and coinage in place, trading routes were well established.

Mirroring that earlier time, in 2021, we should see cryptocurrencies entering the mainstream. The December 2020 Jupiter-Saturn conjunction could be the trigger needed for appraisal of currency systems and acknowledgement of rapid development of block-chain currencies.

Many of the new systems and ideas are set to move forward at fast pace, if not warp speed – most particularly crypto currencies, robotics, space engineering and space travel. In preparation, investors might care to move these areas to the top of their list for consideration.

It has long been noted that as the lunar nodes (which move backward through the zodiac) approach Aquarius, that there is decline in growth reflected in falling indices. The lunar nodes do not reach Aquarius until 2026/7 when a recession is to be expected.

No cycle can be considered on its own, and another important cycle may be said to herald this pending recession: the forty-five year synodic cycle of Saturn and Uranus which reaches its last quarter phase in 2021. Throughout the last 120 years, it can be shown that the key aspects (0, 90 and 180 degrees) between these two planets have coincided with falling indices. In 2021 the two planets will be 90 degrees apart. If history repeats, then 2021 could prove super-challenging for markets generally yet offer buying opportunities for long-term investors. True, the aspect is not fully cleared until 2022 but some investors might wish to get in on the ground floor of new companies.

For much of 2021, Jupiter moves through Aquarius – the sign associated with cutting edge technology. The Aquarius market sector covers all new technology, artificial intelligence,  space age and space exploration. Jupiter makes a brief foray into Pisces, bring attention to oil, pharmaceuticals, media, alcoholic drinks and the water industries. Ahead of Jupiter’s arrival in Pisces, investors could consider gaining knowledge and then investing in these sectors.

Eclipses are attention seekers! but give clues as to shifting concerns and interests. The solar eclipses of 2021 are in the Mutable signs of Gemini and Sagittarius – signs associated with travel which, as a result of Covid 19, has been curtailed – a situation that is unlikely to change at least until the eclipses move on into Taurus and Scorpio at the end of 2021. The first solar eclipse of the year takes place in June at 19 Gemini and will be visible across the northern east of the USA, much of Canada, Greenland and the far east of Russia whilst the second occurs on December 4 at 12 Sagittarius and will only be visible in the South Atlantic.

What the two eclipse paths of 2021 have in common is that they both promise much in terms of mineral wealth even whilst accenting inhospitable areas of the world. Trade disputes involving both regions will likely lead to territorial dispute.

In a search for promising areas for investment, the health industry must surely rate highly in 2021.

It is perhaps noteworthy that the lunar eclipse at the end of November, is in one of the ‘financial’ signs of the zodiac and likely to be the precursor to economic difficulties appearing before the end of the year.

On its nineteen-year long journey through the zodiac, the lunar north node moved through Gemini between October 2001 and May 2003 when the Dow Jones Index (DJI) moved from approx. 9500 at the start of that transit, rose to 10,600, fell back to 7,200 and concluded its stay in that sign at 8,700. Of course it is entirely to be expected that during an eighteen month period that an index will fluctuate. The degree of fluctuation and the position at the end of that nodes transit through a sign is of interest however. From the moves in 2001-2003, we might expect that by the time the lunar node moves into Taurus in November 2021, that the Dow Jones index will be lower than its position at the start of this transit in May 2020.

This though is an examination of just one cycle. It is essential to look back at each Gemini nodal period of the 20th Century. In 1984, the DJI rose from 1108 – 1203 whilst between late 1964 and 1966, the DJI went from 841 to 966. In 1946 it fell from 190 to 182 but in 1926-1928, rose from 170 to 299.  Clearly analysis of the nodal cycle against this one index does not give us sufficient information on which to trade. We must then check to see which other cycles dovetail with these earlier years and determine from this the probability of a fall or rise in index value. It is more than a little interesting that the years in which there were marked losses (2002 and 1946) were years in which Saturn and Uranus reached major aspect – as they will do in 2021.

The nodal position is never irrelevant. Eclipses are important cosmic punctuation marks. Whether solar or lunar, they each give clues as to probable trading conditions – which are obviously a human activity and dependent on human behavior and reaction. What we know is that even minor changes in the geo-magnetic sphere bring activity that can appear unusual and is therefore eventful: at times giving rise to major moves in indices. Marking eclipses in your trading diary and being aware that the period between them often brings volatility, is a useful exercise. The dates in 2021 are, in order, Lunar eclipse, May 26th followed by Solar eclipse, June 10th and finally Lunar eclipse, on November 19th and Solar eclipse, December 4th.

However, between the solar eclipses in June and December 2002, the S&P index fell from approximately 1030 to 940 with key dates in that fall most definitely resonating with the position of the planets of the eclipse charts. In 2021, it might not be just the echoes of eclipse planetary positions that coincide with sharp moves but also the square aspect between Saturn and Uranus.

It is not uncommon for financial astrologers to be asked to assess the end of year position for the various indices and notable that although Wall Street may react in one way, that here could be a difference in the extent of reaction from one country’s index to another’s. A full forecast would require study of each country and index. This article focuses on Wall Street.

In 2021 there are three dominating factors which together seem to indicate that the Dow Jones index (DJI), Standard and Poor (SPX) and NASDAQ  will likely close the year lower than at its start. The lunar node moving from Gemini to Taurus is one factor indicating the potential for lower values at year end. Another is Venus’ cycle: Venus turns retrograde at the December 21st 2021 solstice. Venus’ retrograde in the past has sent indices lower. The most recent Venus retrograde was in Scorpio in 2018 when indices fell dramatically. Prior to that a Venus retrograde in Capricorn also saw indices fall. It is quite possible that a similar fate will occur in the last trading week of 2021.

Fashion and Saturn in Aquarius
Scroll to top