You may know that Jupiter is about to join Saturn and Pluto in Capricorn.

If the past is any indicator of the future – things aren’t looking good!

Consider this chart for the Dow noting that Jupiter moves through all twelve signs in approx. the same number of years – so this chart is based on 12 orbits. From the geocentric perspective, Jupiter move into Capricorn on December 3rd. 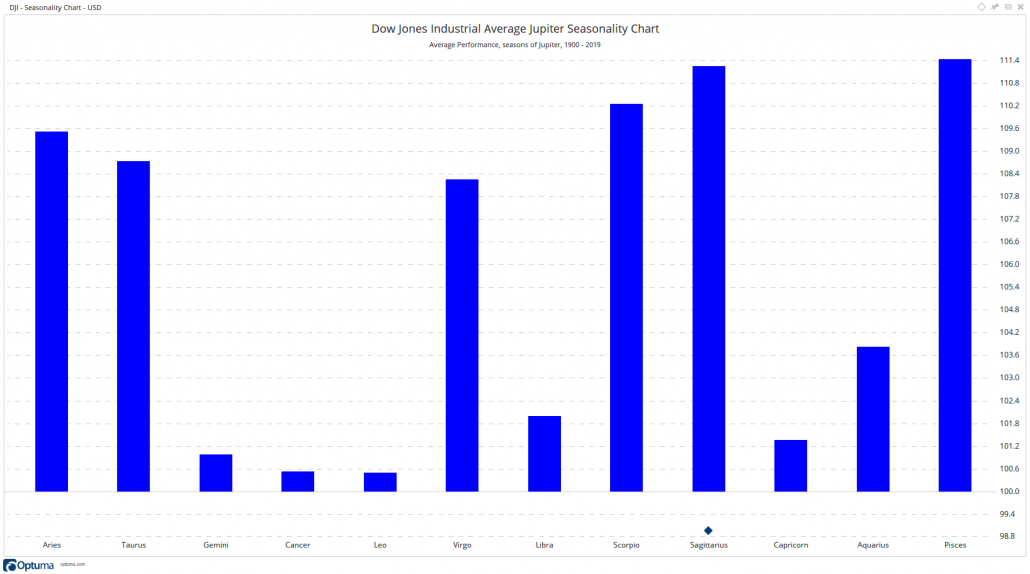 This next graph shows Saturn moving through the sign. It takes Saturn almost three decades to tour the zodiac so this chart I based on just 4 complete orbits. It’s interesting nevertheless. Saturn has been moving through Capricorn all year and doesn’t leave until December 20th, 2020 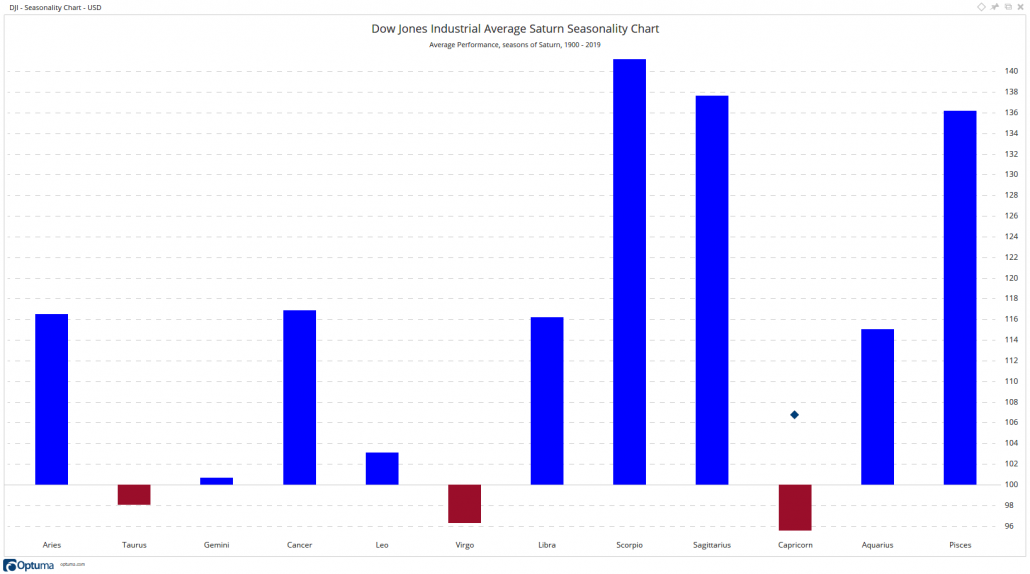 Clearly we could be in for tough times in 2020

I have been looking for short term trades.

There is another Sun-Mercury conjunction on January 10th 2020 – also a Full Moon and arguably a lunar eclipse.

If the conjunction did not coincide with the Full Moon, I would have advocated purchasing the SPX some weeks ago ready for an advance in January.

Yet all is not lost! Mercury at 24 Capricorn

For Mercury’s alignment at this degree in 2020, I would suggest that there will be marked growth into this event – notwithstanding volatility at the Full Moon on January 10th. That growth should be seen between Venus’ arrival at 24 Capricorn (Sunday) December 15th  (so purchase either on Friday 13th or on Monday December 16th ) and Mercury’s arrival at 24 Capricorn on January 13th 2020.

GENERAL ELECTRIC: A Short Astro-View  Where next??

By the time that you read this, Uranus (by either helio or geocentric position) will have completed one and a half orbits of the zodiac from the position held at the incorporation of General Electric in April 1892.

Uranus is associated with chaos, disruption, discontinuity, upset, rebellion, revolution and upset. Uranus opposing itself suggests the potential for a dynamic change of direction: bringing both the potential for exciting development but yes, share price volatility too.

My basic rule of thumb is that if a forecast cannot be backed up by at least three astro-signatures, then it should not be made.

In this instance there are at least five factors that I consider to be drivers of potential product and service development as shown in the Incorporation chart for GE and which should- eventually – lead to major change in share price. The timing of dramatic share price change is apparent through analysis of the First Trade chart but the reasons behind that to be found in the Incorporation chart.

Even a quick review of the Incorporation chart reveals the following:

All this said, I am cognisant of the fact that Chiron is now moving through Aries. Whilst I have yet to study thousands of charts, what I have seen so far alerts me to the danger of collapse and loss as Chiron moves across a solar position. (This applies particularly if Chiron crosses the solar degree of the Chief Executive: a chart not used in this writing).

Chiron has though crossed these degrees of the GE chart before – and survived – twice. On both occasion GE has been involved in new ventures that have proved costly and unsuccessful. The most recent crossing (transit) was in the late 60s and early 70s when GE joined forces with Bell Laboratories to develop the Multiscoperating system on a mainframe computer. The project was not a commercial success though the investment of time and money was not entirely wasted as other ideas developed from this initiative.

It is not unreasonable to conclude that GE might well be seduced into similar projects in the coming years and that though these might yield reward later, that initial development will be costly and that this will be a contributing factor to low share price.

As explained, it is necessary to review both the chart for First Trade along with the Incorporation chart, to determine likely trend in share price.

The First Trade chart shows clearly that this was always going to be a ‘popular’ stock: Again, 5 key factors

The links between Incorporation and First Trade are as powerful:

From this it seems appropriate to say that the relationship between those who invest in this company has very real bearing on GE’s organisation, administration and product development.

Before considering what the future might hold, it is worth mentioning that at First Trade, Chiron was positioned close to the Ascendant (9 Leo) at 11 degrees of that sign. This suggested that this degree area – and the squares and opposition to it – warranted careful study.

It is interesting that at the Mars, Mercury and Venus stations in 2018 that the price level was virtually the same: $12.

Mercury is due to station at 11 Scorpio (right angle to this degree) in November 2019 and could see a return to this price.

From this astro-analysis, what might we expect of GE stock in the coming months?

Yet by Mercury’s November station, and with the above aspects on the wane, the outlook for 2020 using the First Trade chart appears positive:

A review of the sign position of the faster moving planets geocentric sign positions between 1980 and the present (38 years of data) shows that GE share prices tend to rise most when Mars moves through Virgo (August 18 – October 4th 2019), or when Venus moves through Capricorn (in 2019, November 26 – December 19, 2019) or with Mercury moving through Sagittarius (December 9th – 29th).

The over-lapping of the Mercury and Venus positions (December 9th to 19th) suggests that this could be a positive 10 days for GE: perhaps heralding better times in 2020.

As a final point of interest, a review of the Lunar Apogee and Perigee positions over the last 3 years reveals a pattern warranting more research. It would appear that GE stock is sensitive to this cycle: turning downward from apogee on no less than 28 occasions out of the 37 researched. Much more work to do – but intriguing.

We know that the cosmos doesn’t do EXACT repeats yet it is tempting to look back to similar planetary pictures and wonder to what degree themes will repeat.

There is a date for the ‘first’ sitting of the Westminster Parliament on 20 January 1265 (though the exact time of the event is unknown).

Even without that exactitude, we can review the planetary pictures of the day and find – unbelievably, that the Sun was EXACTLY conjunct both Eris and Sedna at 8 Aquarius. In the last 1000 years Sedna and Eris have only aligned 7 times –as viewed from Earth. Each of these seven events took place between 1263 and 1265. There has been no conjunction since! Clearly 1263-1265 was a very special time indeed. There was only one date in that time frame when the Sun also aligned with this conjunction.

The inauguration of this parliament on the very day when the Sun too was at 8 Aquarius goes a long, long way toward explaining the durability of the Westminster parliament and, since both Sedna and Eris have strong ‘feminine’ roles, perhaps says something about Westminster as being seen as the ‘Mother of Parliaments’.

Though the Sun has transited this chart 754 times since 1265, using the solar arc method of forecasting, the solar arc Sun has travelled just a little more than twice around the chart. With the distribution of planets in 1265, Mercury is behind the Sun and by Solar Arc has only just reached Pisces. It is this that may well have been a crucial factor in the mercurial chaos of recent months (complete with Gemini or Mercury-ruled Prime Minister Johnson)

In the last few weeks, – in fact since Johnson’s decision to prorogue parliament as indicated mid August as Mars opposed solar arc Mercury, – the transiting stellium in Virgo, opposing the solar arc configurations have aggravated confusion. Though there has been much talk of attention to detail conclusion and practical arrangements have yet to be agreed.

The last time that this solar arc pattern occurred was in the mid 17th century when Cromwell took control of parliament.

As stated, the cosmos doesn’t do exact repeat performances. Whilst the chaos might appear similar we are unlikely to see that repetition.

That said, more upsets are on the horizon

In 2021 and 2022, solar arc Mars affects both Uranus and then Pluto, to be followed by solar arc Saturn opposing Pluto in 2024. The arc events of 2021 and 2022 indicate struggle, upheaval and yes, perhaps even explosion, followed by complete upheaval but potential re-establishment in 2024.

We should of course note that the very fabric of the building is under duress presently. Big ben is draped by plastic and scaffolding whilst the interior of the Palace of Westminster is in desperate need of repair and overhaul.

It has long been mooted that the building is ‘wrong’ in other ways and that it is time for central government to be literally that – ‘centred’ in the heart of the country. Many are mystified by the workings of the Westminster village as it is known to politicians and journalists both of whom seem so very out of touch with the public. Perhaps things would be different if Westminster became a tourist zone and a new parliament convened elsewhere. (The very brilliant astrologer Roger Elliott made a forecast years ago that parliament would be moved north post 2012. He may not be many years out)

How though can we make practical use of this information? If we concede that we are witnessing the collapse of a system, what will replace it? – and when?

Fact is that before 2026, Neptune, Pluto, Eris and Sedna will all have changed signs. Note that the first two do so every decade but that it is over half a century since Sedna last made ingress (1966) – and many thousands of years since that planet last moved through Taurus and Gemini. We are about to enter truly uncharted waters.

What we know that is that Neptune will move into Fiery Aries, Pluto into Aquarius (Air) and Sedna into Gemini (Air): major contrasts to the present line up in Pisces (Water) Capricorn and Taurus (Earth). Not only does this signal the rapid developments and deployment of artificial intelligence but also the probability of the development of a new political system. Those focused on the arcane procedures of the past might make better use of their energy by focusing instead on how every individual could have their voice heard.

The planets didn’t disappoint and markets turned down after Venus’ station (October 5th) and markedly after Mercury entered geocentric Scorpio on October 10th.

The next Full Moon on October 24th is the first of its kind since 1936 immediately prior to one of the greatest slides in stock market history.  It should be recalled that when the Full Moon aligned with Uranus in September 2008, Lehman Brothers collapsed.

Heliocentrically Venus moves into Taurus on 24th and immediately aligns with Uranus – which should be good for precious metals. Possible gold price rise.

Just two days later, the Sun and Venus align as the so-called crash-cycle reaches its next phase. We should expect major market moves on Friday 26th.

Note: looking at the long-term, history may yet show just how precarious stock markets have become. If history repeats, then, as in 1937, 2019 could see the Dow fall by over 40%.

COMPANY IN THE NEWS: PATISSERIE VALERIE

Here in the UK, Patisserie Valerie whose IPO was 19th May 2006, has narrowly avoided receivership by a £20m loan injection. Its finance officer was briefly arrested but later bailed.

Could study of planetary cycles have led to a forecast of these events? Probably.

Of course Patisserie Valerie was not the only business to come to market that day and the others are not in this predicament. The link between Patisserie Valerie’s registration in 1926 and the IPO date reveals why this company is experiencing present difficulties.

For the moment though I’ll focus on the IPO date and suggest 5 astro-reasons as to the reason behind recent challenges.

FORECAST: Astro-signals suggest a take-over in 2019