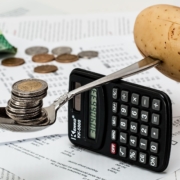 The Super Full Moon on July 13th, which configures Pluto, the ‘planet of power’, should coincide with singular market reaction and the exposure of corruption.

Also in July 2022, Uranus is exactly aligned with the lunar North node, – another planetary picture indicating high drama. Political pressures will surely be great and the overthrow of at least one government likely. Market-wise, volume of trade will surely increase with prices volatile.

A downward trend should continue at the New Moon on July 28 when Mercury conjoins Saturn. Both are at right angle to Mars; in turn conjoining both the North Node and Uranus. Again, it is more likely that prices will be go down than rise and that this will coincide or even be driven by political drama.

A negative trend is probable too at the Full Moon on August 12, when Saturn (depression) and still loosely in square to Uranus, conjoins the Moon. In the last century, each hard aspect between these two planets has led market falls.

There is little comfort to be found at the August 27th New Moon where Mars, in Gemini, squares the lunation, as Venus in Leo opposes Saturn in Taurus and squares Uranus in Aquarius. This T—square in Fixed signs implies rigid controls in the form of rules and regulations that disable normal trade. Crypto currencies may suffer.

Pivotal in 2022 is the Full Moon (17 Pisces and opposing Mars’ position in the chart for the New York Stock Exchange) on September 10. Not only are Saturn and Uranus still in square formation, but the Sun opposes both the Moon and Neptune as Mercury stations retrograde at 8° Libra. Each of these factors alone should set financial alarm bells ringing.

It is probable that this Full Moon will prove a turning point. Technical analysis closer to the time should indicate just how extreme price movement will be. From the astro-finance perspective, there seems high probability that there will be significant downward slide between this Full Moon and the New Moon on September 26 (EDT).

The chart for the final lunation of the third quarter of 2022 is dominated by Saturn (still at right angle to Uranus). Until this aspect is cleared, growth seems most unlikely. What is interesting about this New Moon in Libra is that the opposition to Jupiter. This suggests exaggeration (Jupiter) but also the potential for major mergers (Libra). It is the promise of these that could avert markets falling further.

The first Full Moon of this quarter is interesting in that the Sun conjoins Venus in Libra as the Moon conjoins Chiron in Aries: a seesaw pattern. It is tempting given Chiron’s placement to assume further correction. Technical analysis closer to the time would confirm this. There may be concern about the value of pharmaceutical, oil and media stocks whose value could plummet. Yet these stocks could rise when Jupiter returns to Pisces at the end of October.

As planets – in this case, Jupiter, – move from one sign to another, there is a ripple effect that takes stock market attention from one sector to another. Adding to the cosmic complexity, Mars turns retrograde within orb of opposition to the Galactic Centre. At one level this conjures images of extreme war, at another it may be about computer viral attack and at another major legal wrangle – any or all of which could prompt traders to think negatively and to draw indices down as a result.

By late October there will surely be unwillingness on the part of investors to go back into the market. Yet it could be argued that up after a bruising nine months of the year, that prices are approaching attractive buying level.

Investors could use this last quarter of the year to think ahead and look at the sectors linked to Jupiter’s upcoming transit of Taurus in 2023. Taurus is associated with banking stocks and with confectionary. It may be that stocks in these sectors are attractively priced in late October or early November.

By the Lunar Eclipse on November 8, Mars is out of bounds: providing a defining moment and change of market trend.

Indeed, at the Sagittarius New Moon on November 23, both Mercury and Mars are out of bounds whilst a locomotive planetary configuration is led by the optimistic Sun in Sagittarius. At last, there should be light at the end of 2022’s dark financial tunnel.

With the presence of Jupiter in Aries boosting related stocks (cutting tools of all kinds, military hardware and sports equipment), by the final Full Moon of the year on December 8, traders and investors alike should feel encouraged.

In summary: whilst the effect of recession and even depression will surely be felt globally, by the close of that year a turning point should be reached. Those cash rich and who still have investment or trading courage, should find the last six weeks of 2022 bring opportunity to buy in to markets at optimum price.